The first time we step into salvage site, there is always an uncanny feeling; the people who have passed through the spaces, their memories, celebrations, times of struggle. These sites contain the human experience, both intimate and public. The Holman House was no exception. Over a century of residential and commercial occupation had left their marks in ways that were visible and invisible. As Portland grows, we are regularly faced with the challenge of balancing historic preservation and the evolution of the urban landscape; it’s a story as old as the city itself – preservation versus progress. Just like anything else where viewpoints are in opposition, it comes down to the actors on both sides working together to find harmony in a place that fosters both growth for the future and guardianship of the past.

Looking out the 19th century leaded glass window at the Leed certified multi-unit building across the street.

The initial walkthrough allows us to make a list of all the salvageable (definite and potential) materials and pieces. In the case of the Holman House, the foremost items to salvage were the original decorative woodwork pieces still extant in the house. Seen in the images below, the first floor entryway had an appreciable amount of oak paneling, columns, corbels, stair rail and balusters, and two beautiful spandrels. 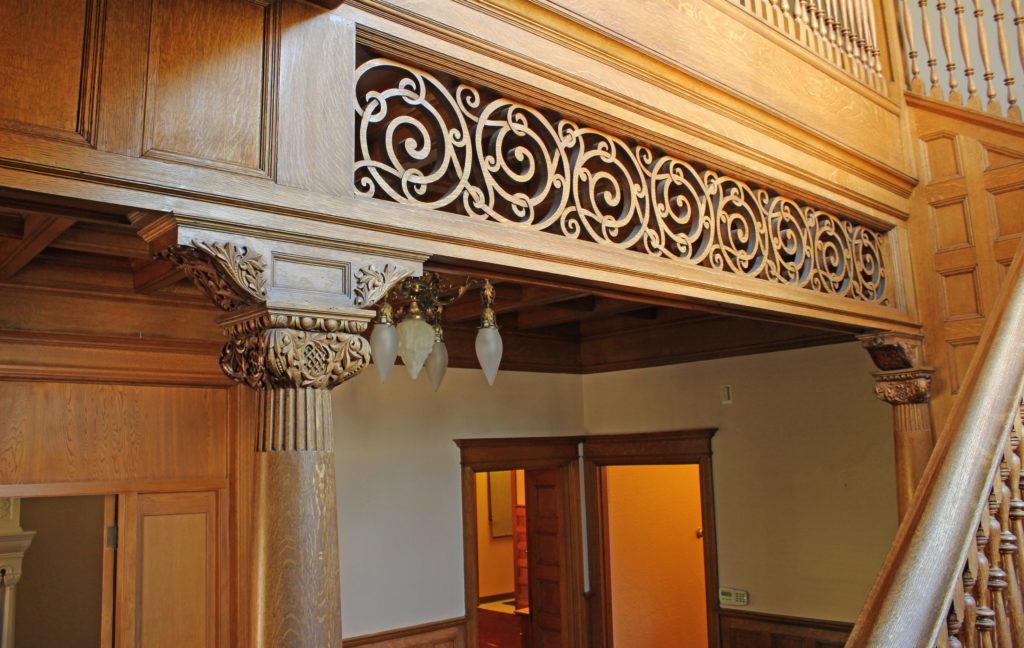 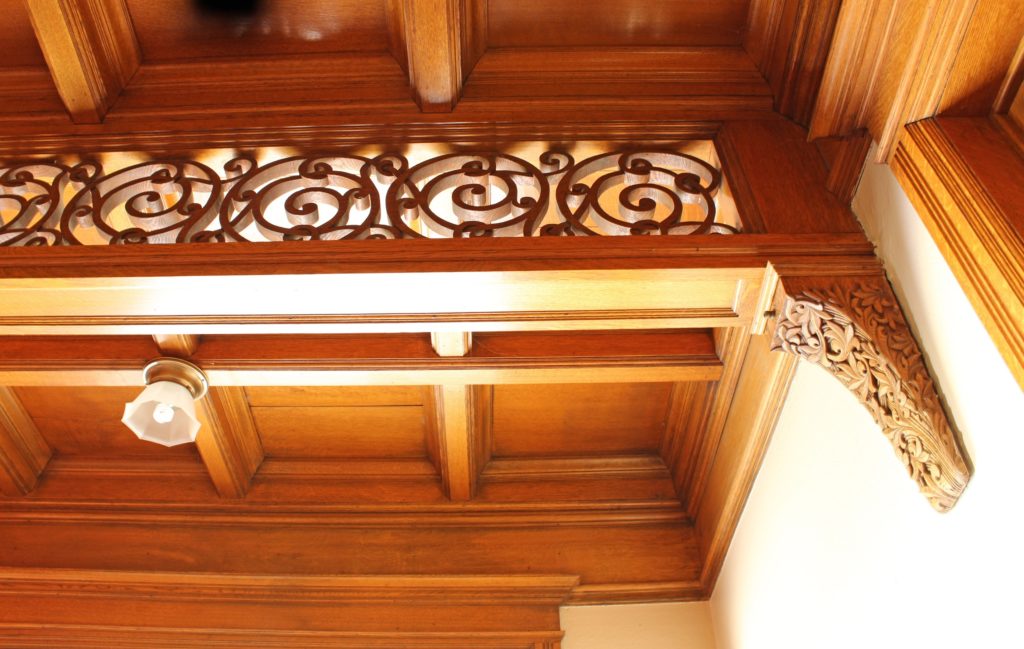 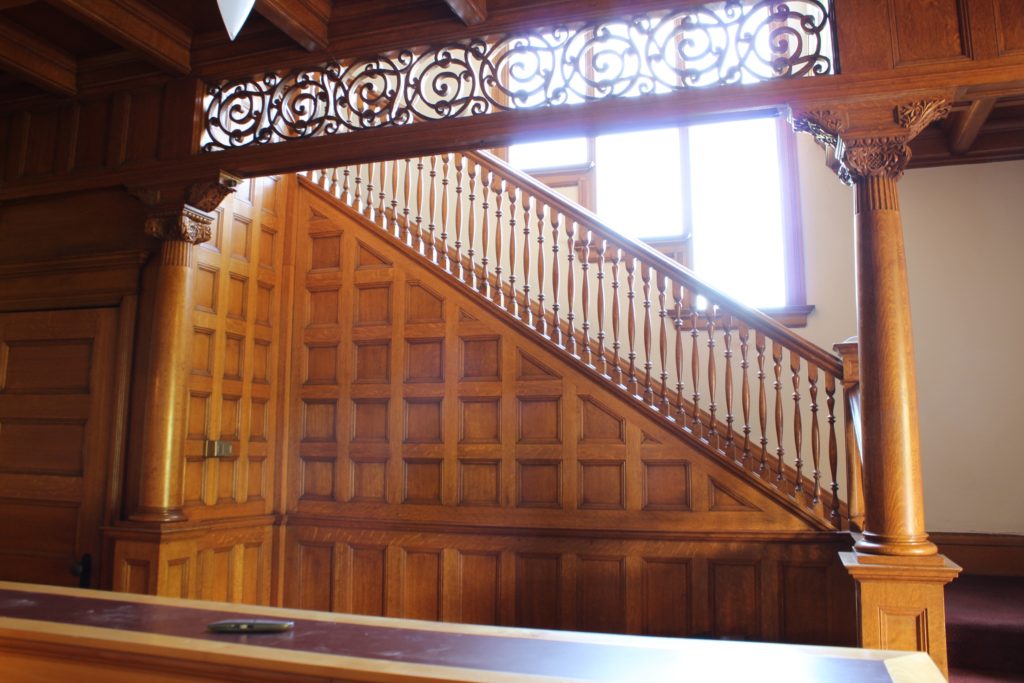 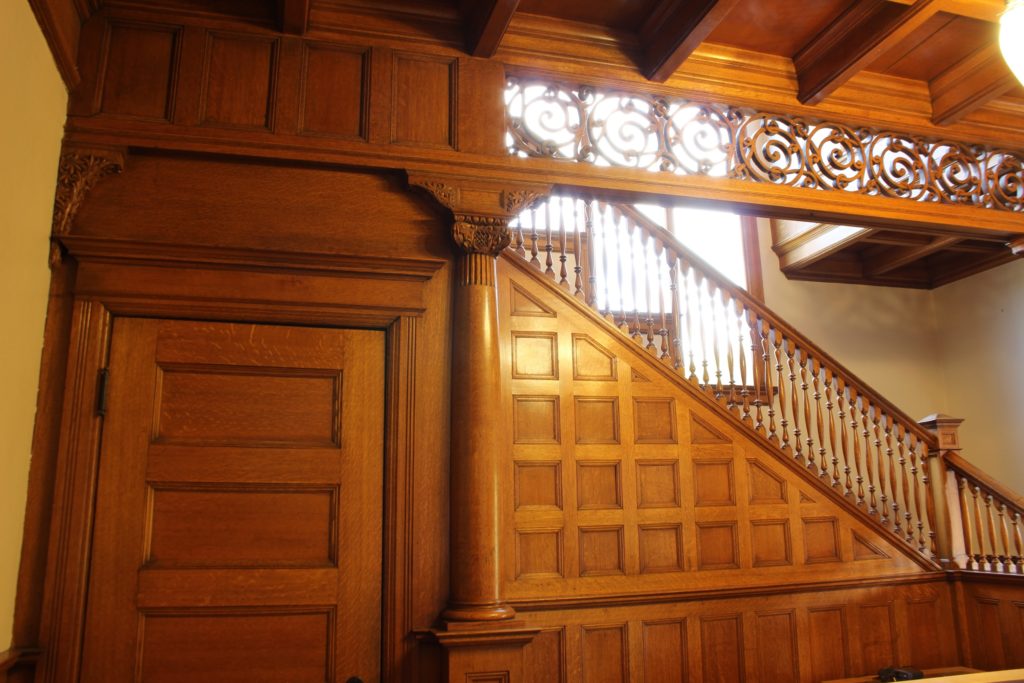 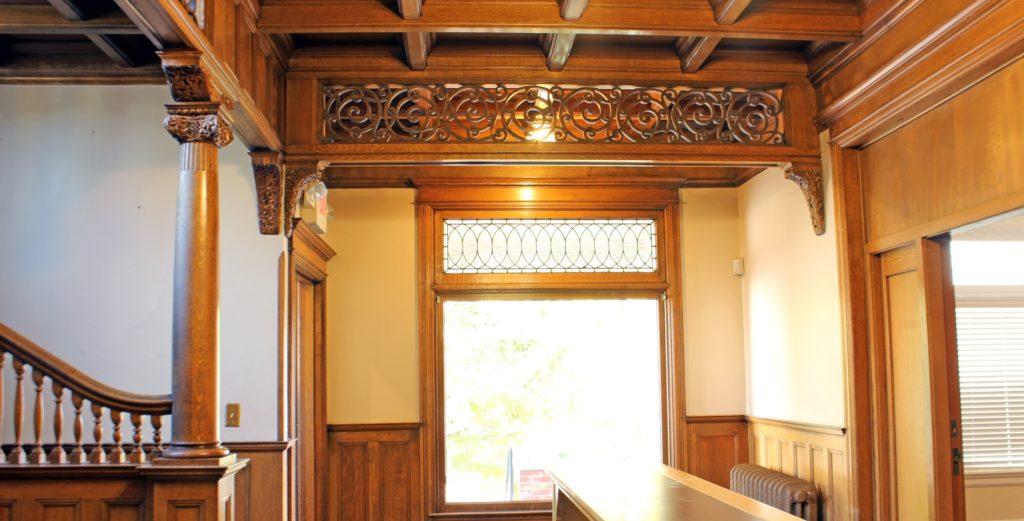 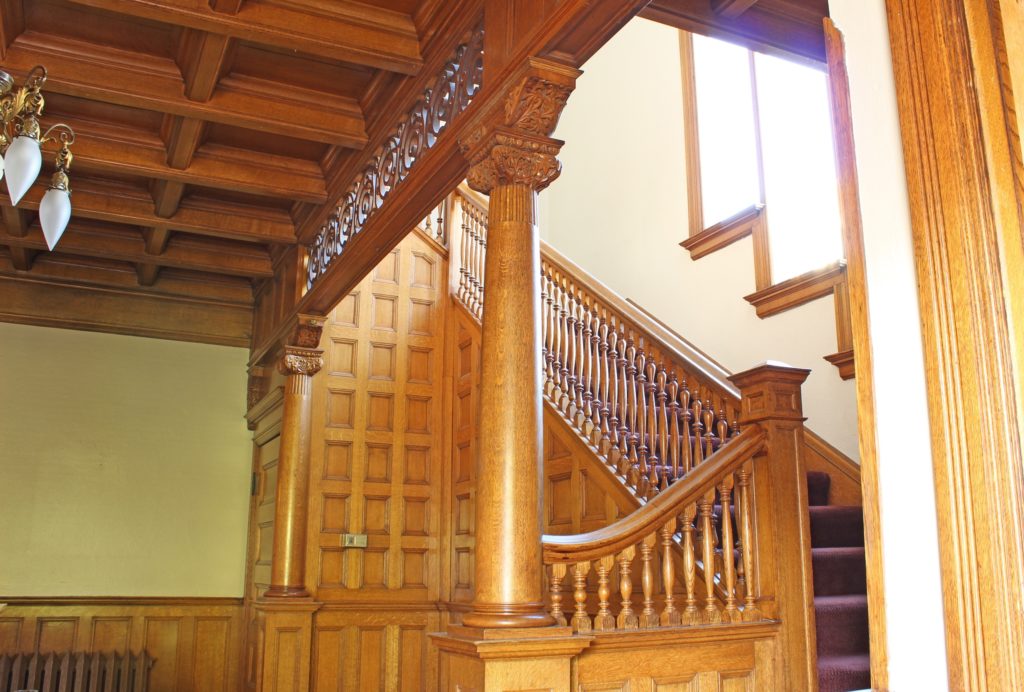 In addition to salvaging all of the decorative woodwork in the entry hall and main staircase, there were two beautiful mantels and an incredible built-in sideboard original to the home. 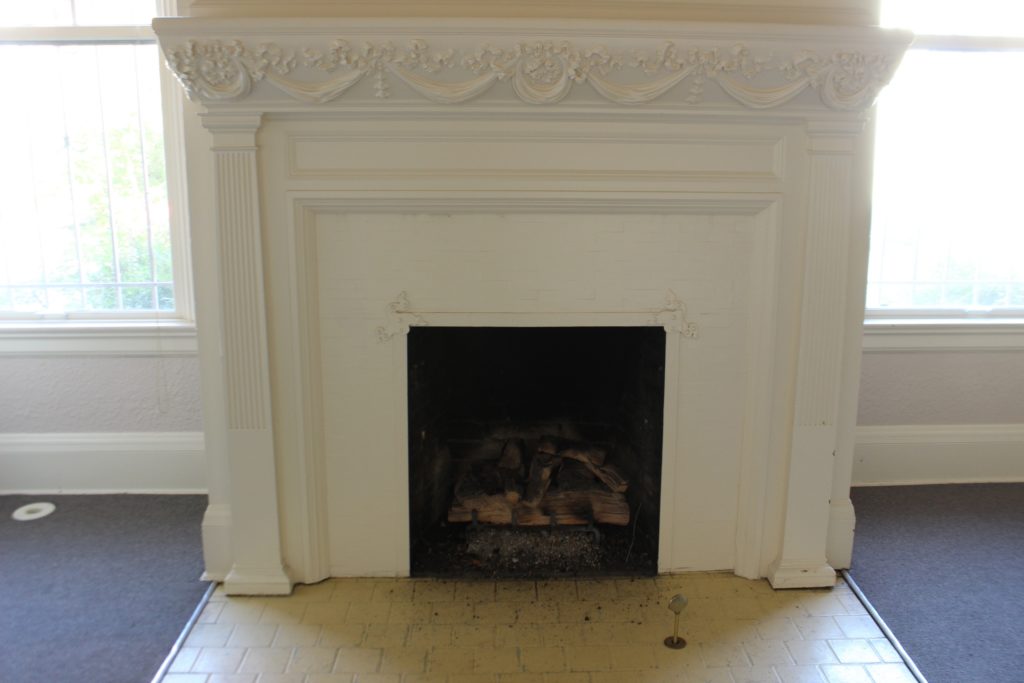 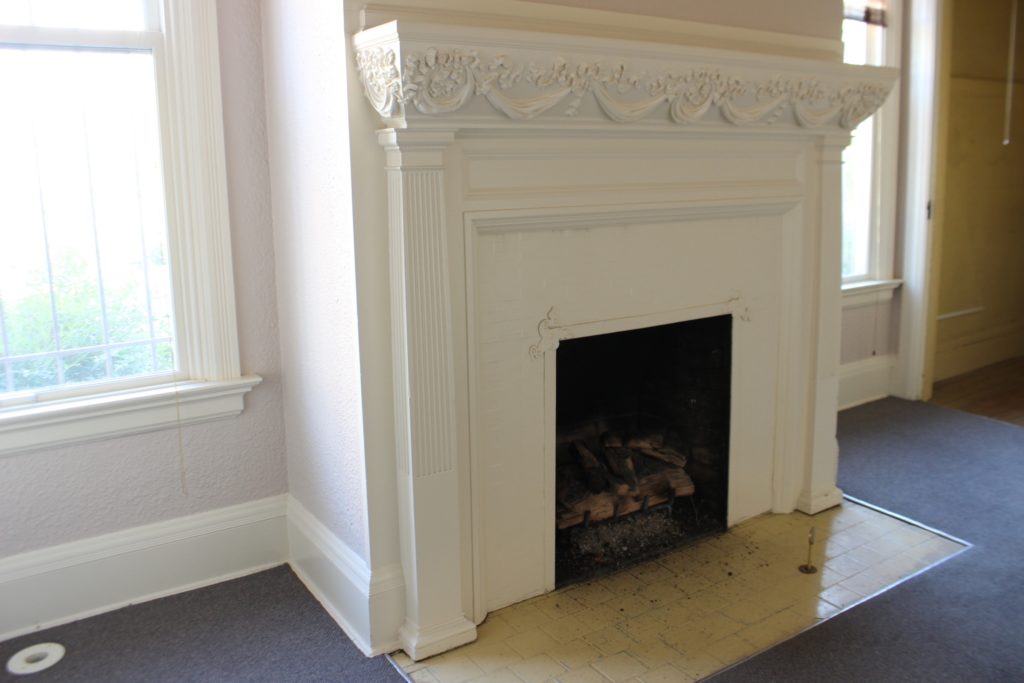 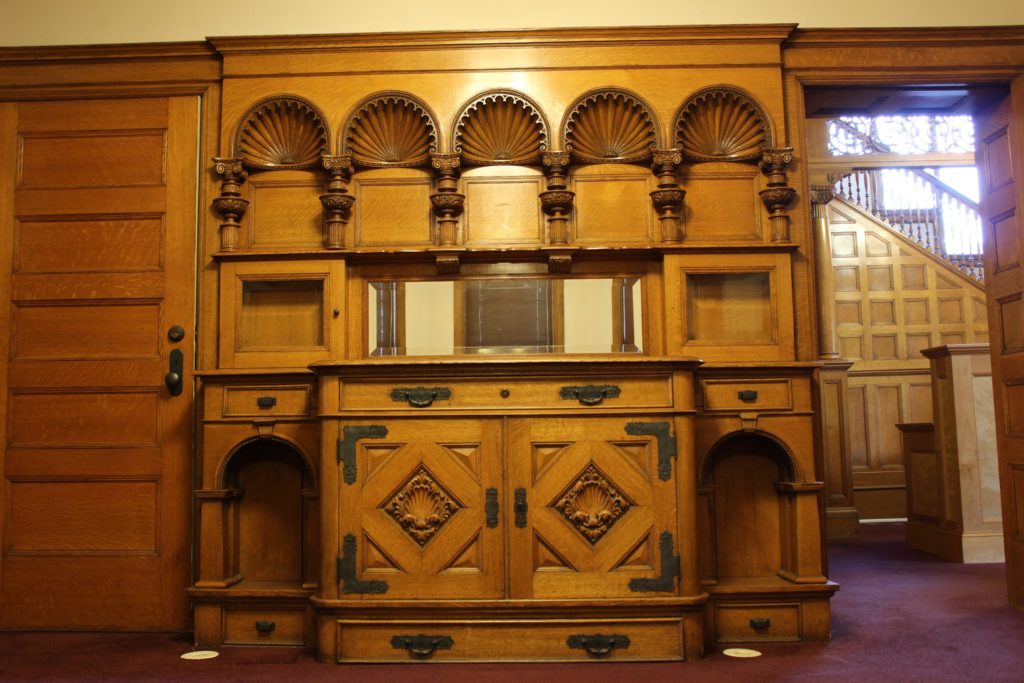 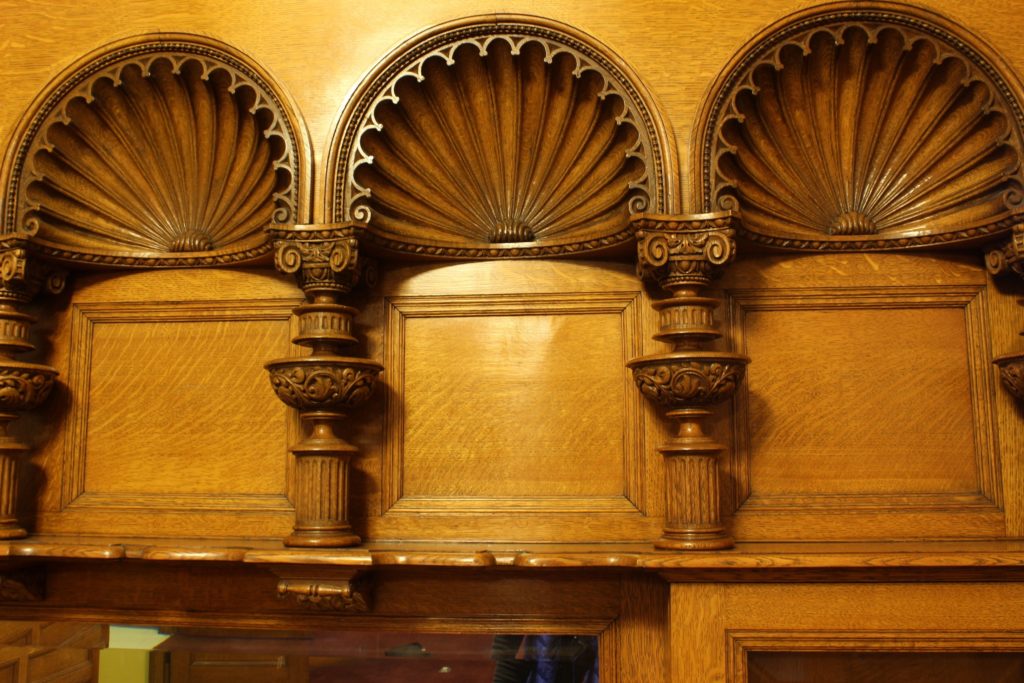 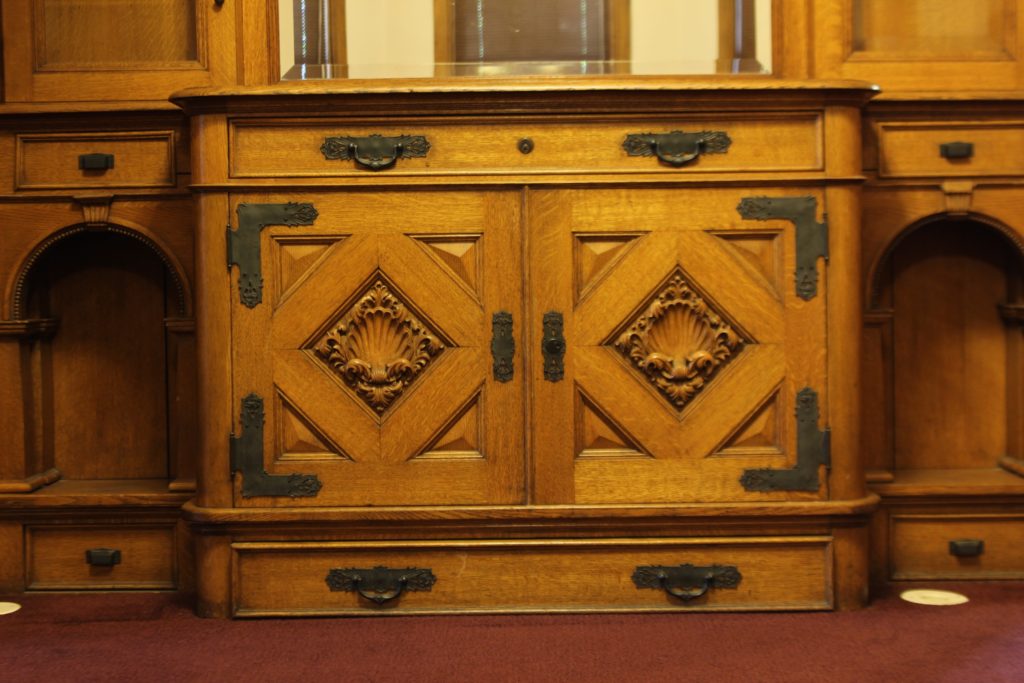 Many of the original doors were still extant throughout the house, which were five panel solid oak doors, some with transoms.

The crown jewel of the home was undoubtedly the fireplace and built-in structure in an upstairs room. It’s our hypothesis that this was Mr Holman’s home office. Being a prominent lawyer, he would have needed a private but spacious place to meet with clients and work at home. As a lifelong bachelor, it seems credible to us that he would have been married to his work (aside from his rose garden) and desired a space that was conducive to his high minded occupation. 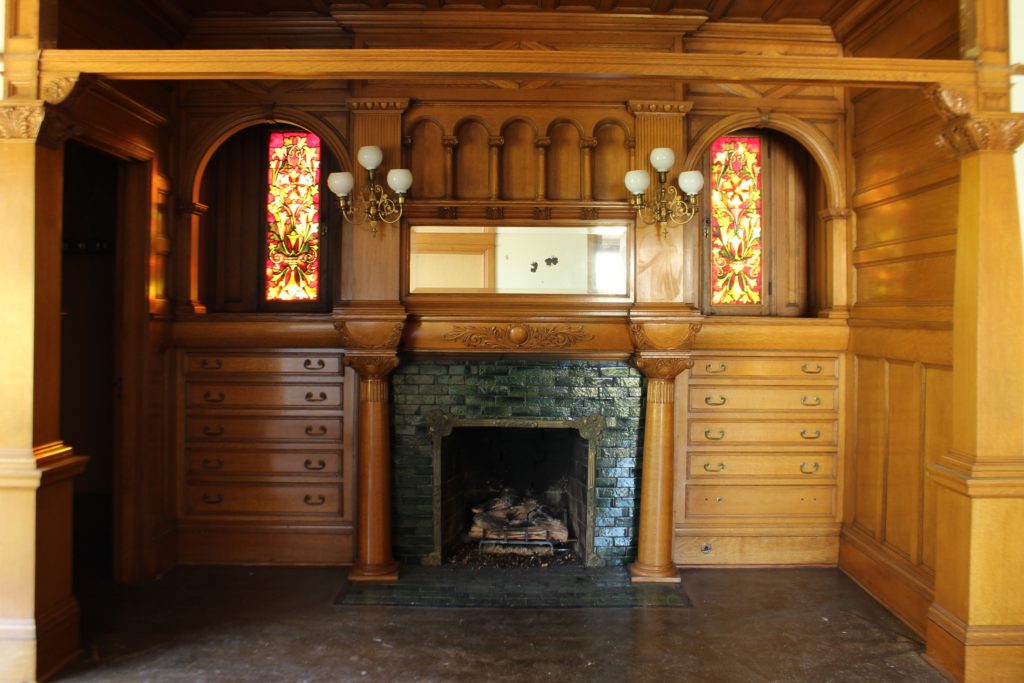 The gemstone green of the firebrick and vibrant red stained glass windows are striking color contrasts to the honey blonde oak woodwork.

We believe these original windows are early Povey Brothers. They feature a vining floral pattern with a central yellow rose – a perfect match for Mr. Holman.

So where to begin?

Removal of the paneling was no easy task, which is probably why we started there – get the hard stuff out of the way. The lime based plaster contains a horsehair binder and it chips easily (hence the reason for picture rail in older homes – you don’t want to pound nails into the plaster). Finer gypsum based plasters were used in decorative motifs and were even more friable. They both make a lot of dust when you start breaking them down. 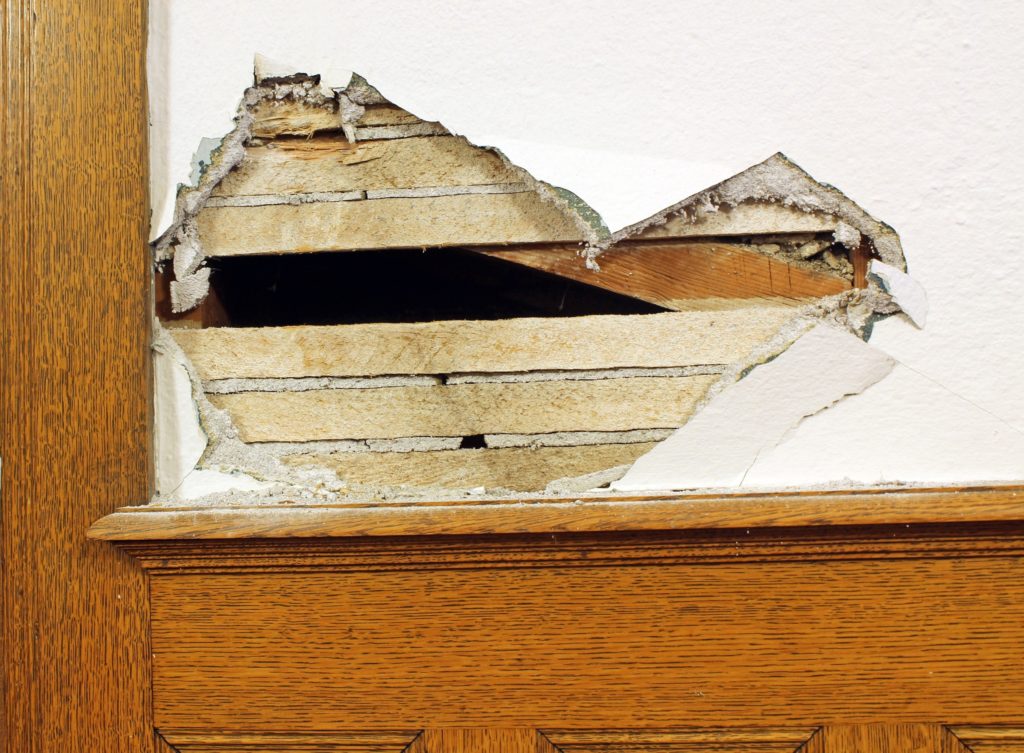 When we opened this wall, which was in the dining room, we noticed space for a pocket door was allotted, but apparently never used (as seen in the parlor photo from the early 20th century in our last post).

Great pains were taken to remove the paneling in complete sections, as each piece was hand nailed. 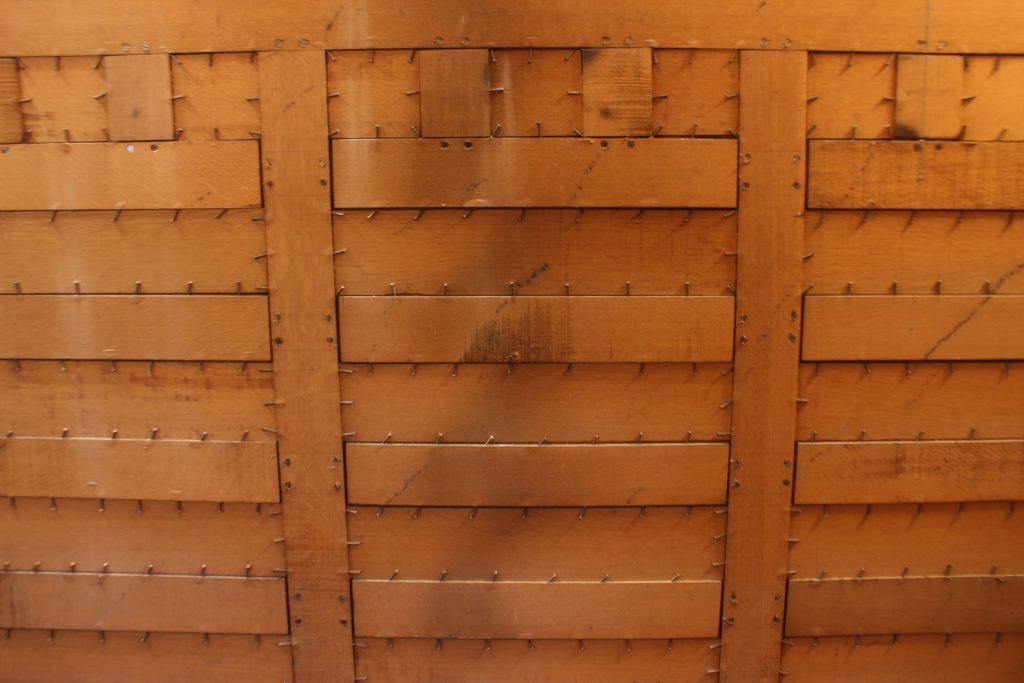 Reverse side of a wood wall paneling section – amazing carpentry skills at work.

Since the flooring had been either sanded to oblivion, or covered with asbestos tiles, we were unable to salvage any of it; however we did manage to pull all of the baseboards and casing. Woohoo!

The dining room built-in was just that – built-in. It could have been a  structural element to the house it was so solidly enthroned in the wall. We removed it in sections, starting with a sawzall to cut it from the joists and framing and then stepping to down small pry bars.

On the back of the piece, a stamp from the mirror silvering company (William P. Fuller, Co.) helps to substantiate a production date, though sadly nothing for the identity of the carpenter. Dated February of 1894, we also get some insight into the timing of the home’s construction. 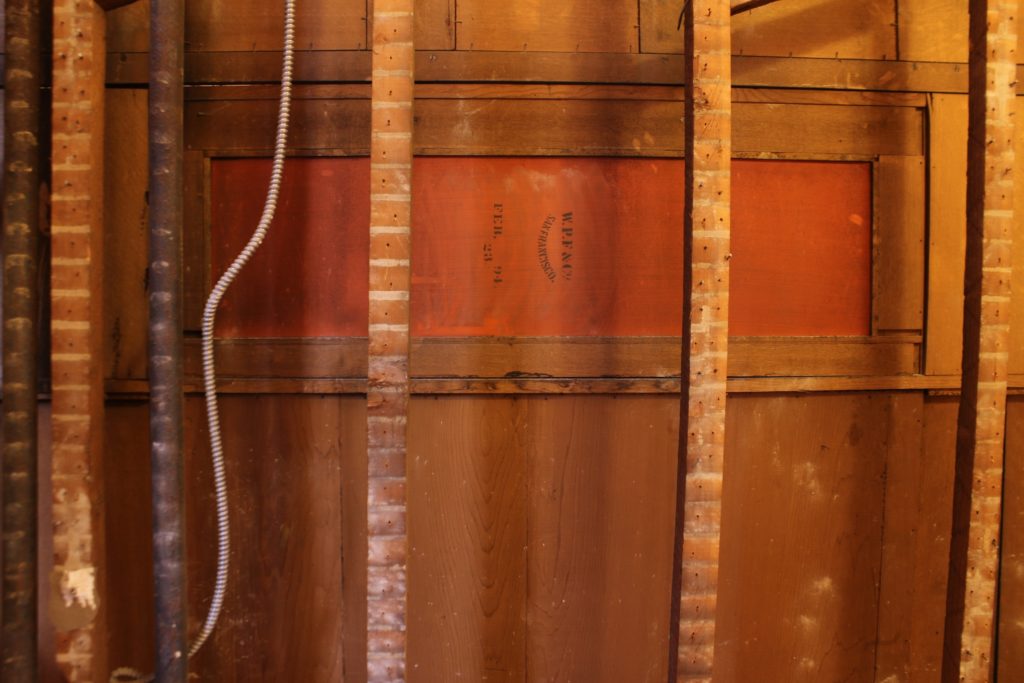 Stayed tuned for the third and final installment of our Holman House salvage story for the removal of a fireplace mantel and the revelation of a mysterious lady.

Posted on October 20, 2016 by Katybeth in Salvage, Uncategorized1 comment