Here at the Mill, we are pretty metal. Heavy metal. Mainly because we have a lot of old heavy metal things around the shop. We probably aren’t the only folks who’ve experienced the smell of your hands after touching something metallic.

This also brings us back to the title of this post. Pong. We also know that folks on the other side of the ocean in places like Britain and Australia have ways of saying things that Americans find quirky – no doubt vice versa in those places. The word “pong” is used to describe a something stinky, like if you were to say “Phew, Grandma’s breath has a real pong and her mustache scratches me when she kisses my cheek.” 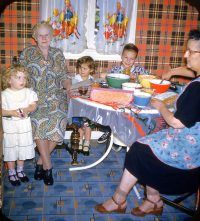 The cheek pinch is coming next!

That said, some folks also feel that metal has a particular pong to it, to the point where we often refer to things as having a “metallic” odor or a “metallic” taste. For humans, the smell of metal – particularly iron – may have had evolutionary advantages, but more on that later. When we handle a metallic object or even with water that has a higher mineral content, it turns out that it’s actually us making the smell. The volatile organic compounds of that metallic odor are actually our own skin peroxides reacting to the ferrous (iron) ions in metals. The iron molecules react with the lipoperoxides (think fat cells) in your skin to create the odorous carbonyl hydrocarbons (think metal smell molecules) that are in fact just the breakdown of your body’s own odor making cells. Too long, don’t read: you make the metallic smell from your own body. Oh, and that evolutionary advantage thing? If you hop in your time machine to the hunter-gatherer era of human existence, being able to detect the metallic odor of blood – human or animal – would help us track prey or injured party members.

So next time you encounter the smell of metal, be sure to recount this fun anecdote to your friends so that they too begin to self consciously smell their hands like you’re doing now.

About the Author: Katybeth